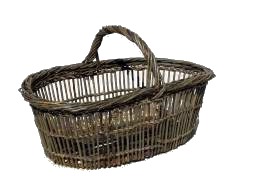 Despite recent research proving beyond doubt social media’s calming effect on geopolitical and racial tensions, CollabSystem is not convinced and is launching a campaign to equip as many people as we can with HandBaskets.

Helena Basquette, CollabSystem’s head of wicker weaving, described the move as a reaction to the non-eventful world of social media:

It used to be that Twitter was a place of bullying and outrage, a wild west of bots and hate speech. People have wised up to that and now simply ignore it. All I see these days are random acts of kindness towards minorities and the underprivileged. There’s so much compassion, it’s enough to make you feel ill.

HandBaskets will be distributed at yoga studios across the country, starting tomorrow.

A HandBasket is a basket, typically made from a sustainable crop, which can be used to transport groceries and other items. It was first invented as an alternative to the single use plastic bag, which has effectively been eradicated worldwide.

CollabSystem’s HandBasket takes the functional and turns it into a powerful weapon against progress. Unlike regular handbaskets, Helena has incorporated hidden compartments for mace and tinfoil hats to protect against assault and mind control. What looks like an unassuming effort to save the planet from plastic waste is actually a self-contained defense arsenal. HandBaskets sold in Montana also have a compartment for an open carry firearm (batteries sold separately).

Each HandBasket comes complete with two tinfoil hats, one for you and one for a friend. Random HandBaskets also come equipped with tiny hats, suitable for infants and children. Please fit your own hat before assisting others.

Each HandBasket also comes supplied with your own PPH (personal portable hell) in the form of an inbuilt wireless speaker with an eternal subscription to satellite talk radio.

A Return to Doomsday

It is hoped that the widespread use of HandBaskets, particularly by comfortable middle-class citizens of wealthy countries, will bring about a return to the traditional polarizing effect of social media on the world. Not longer can people support altruistic and humanitarian causes without being shamed by their neighbors. Not to mention, they’ll probably be on the receiving end of some HandBasket pepper spray.

Once CollabSystem injects some hate speech on social media through HandBaskets, nothing can stop this snowballing out of control and bringing about a return to untruth, deception, schadenfreude and bigotry that Twitter was originally designed for.

If not, we’ll have wasted a lot of money buying baskets from sweatshops in developing countries.